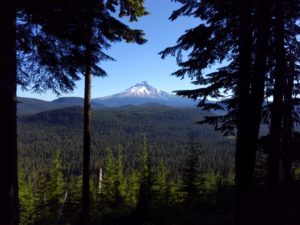 View of Mount Hood from the first half of the race.

I’m having a hard time getting started, so here’s the “short version” of the Mount Hood 50 race report that I posted on Instagram, Strava, and Facebook a few days after the race:

This is it. Shuffle-run to the finish line, awkward jump to high-five the race director, and an attempt to smile despite having gone through some serious lows during the last few miles. I finished the Mount Hood 50.

I was very close to the back of the pack and honestly might not have made the cutoffs if the course hadn’t measured a tad short. The weather was HOT and there were some mean climbs in the last 22 miles. The views of the mountain were amazing, though, and the volunteers were the most enthusiastic and helpful ever. @gobeyondracing put on a most excellent (and environmentally friendly) event. All of the other runners were heroic. And the trails? SOFT! Pine needle cushioning!

Big thanks to @fransnyc for cheering me through the whole thing despite having a race of his own to run the next day. And to my dad for driving out to the middle of nowhere to hang out with dirty runners, watch me drain blisters at mile 28 (he documented it!), and catch me at the finish line. At which point I puked. It was great.

All the texts, emails, and Instagram/Facebook posts of encouragement from my Brooklyn crew meant a lot. Thanks, guys!

I can’t help comparing this race to the Bear Mountain 50k I ran in early May. That one was basically a 100% positive experience, executed with 100% confidence, despite the grind on the Long Path ridgeline and then at Timp Pass. This one was … NOT 100% positive, and nowhere near 100% confidence. I was fighting to talk myself out of quitting on my way into the mile 28 aid station, and I was fighting to keep going up the final 3-mile climb about 8 miles from the finish. I have no desire to do another 50 miler.

For background, my initial plan was to do the 50k at Mount Hood. But the lottery for the 50 miler opened up first and I put my name in … and got picked. Eek. Dummy. I didn’t have time to do a really solid 50-mile training plan, so instead I just ran the Bear Mountain 50k, took a week or two easy, and then rolled into a few weeks with 5- and 6-hour long runs on tough trails, which got me into the high 20s in long run mileage and the low 50s in weekly mileage. It was not ideal, but I was just hoping it would get me through the race in one piece. Here are the painful details:

Distance: 47.6 miles on my Garmin (I think it measured short for other people, too)

Goal: According to the spreadsheet where I record upcoming races and results: “Don’t die.” That sums it up. I didn’t know going into this if I would hit the cutoffs at mile 28 and 39. I barely squeaked through.

Weather: Thankfully the weather in this part of Oregon is much less humid than in New York, and it gets cooler at night, but it was still hot: bright sun and mid- or high 80s by midday. The course was pretty shaded except for one stretch between miles 28 and 34 (ish), which with the out-and-back was also miles 42-48 (ish). The final 4 miles of the race featured a bonus killer mosquito swarm, just to keep things interesting.

Logistics: I camped with Frans and some friends at Timothy Lake, and that was the BEST. I ate and slept well the night before the race. Our campsite was only 2 miles from the start and finish line, and I actually rode a bike to the start. My dad drove out for the day. The course was a double out-and-back: first to the north (14 miles out, 14 miles back, with crew at mile 28, which was also the start/finish), then to the south (11 miles out, 11 miles back, definitely the tougher part of the course). There were a total of 9 aid stations, and they were all amazing in terms of both food and volunteers. After-race cleanup when you’re camping is a little weird: I waded into the lake to rinse as much salt and sweat off as I could, then soaked my feet in a washtub with some dish soap by the campfire to get them cleaner. Despite my super-unsanitary blister draining operation at mile 28, nothing got infected.

Gear: Basically the same as for Bear Mountain, but with new insoles with slightly more arch support in my Altra Timps. I’ve been dealing with some pain in my left heel (above where it hits the ground, but not as high as the Achilles tendon) and I need to figure out if this is tied to the Altras, or the insoles, or something else. I taped a lot of myself (big toes and under front and back of bra strap) with Rock Tape, which prevented a ton of chafing. My middle toes, however, just recently started blistering, and this happened during the race. It wasn’t bad enough to affect my stride, but I needed to drain and tape them at mile 28.

Hydration/nutrition: I drank and ate well in the first half, less in the second half as it got hotter and I got more tired. Surprise. I carried water and Tailwind – the Tailwind gets harder for me to get down as I get further into a race, but it at least provides a few more calories. I carried a variety of gels (Clif and Hammer) plus some Clif Bloks, trying to get 100 calories in every 30 or 45 minutes. I grabbed small snacks from aid stations but mostly relied on the food I was carrying. I’d like to get better at eating aid station food at races.

Worked well: Gear, crew, and logistics in general were pretty dialed in. Also, despite all the angst, I finished the race. Recovery was pretty quick, with my left heel taking the longest.

Learned for next time: As mentioned, I don’t think there’s going to be a next time with 50 miles. At least not soon. But I’d definitely train more thoroughly for the distance, and do everything possible to get on at least part of the course beforehand to know what it’s like.

Up next: Reykjavik Half Marathon. Because half marathons are awesome, and Iceland is awesome.