Here’s what I’ve done since the Steamtown Marathon:

That was week 1 of recovery: 4 miles of easy running but a lot of non-running activities toward the end of the week. I ate ravenously on Tuesday, my quads hurt until Wednesday, and then I felt fine.

So week 2 of recovery was 18.5 miles of running, plus lots of biking, climbing, and strength work.

I’m registered for a trail half-marathon in 3 weeks so I’ll see if I can (carefully) ramp up to that. I’ll wait until just before the race, though, to decide whether I’m trying for a PR or just taking it as an easy long run through the woods. Both sound appealing. I have a basic schedule put together for the rest of the year: pretty much four days of running a week, including speedwork or hills on Wednesdays and a long run each weekend.

Last year’s NYC Marathon was my first marathon ever, and it was rough. I enjoyed it (well, part of it) and learned a lot, but I didn’t necessarily want to run another. Then my dear runner/editor friend T brought up the Steamtown Marathon. “Net downhill course!” she said. “Pennsylvania countryside in fall!” she said. “A field of around 3,000 runners!” “We can share a cheesecake afterward!” I didn’t really need a lot of convincing. 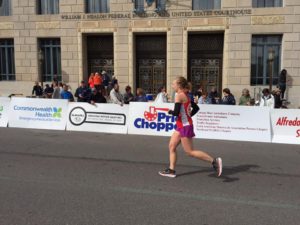 So I trained all summer and, as rough and humid as this summer was, especially at the end, I truly loved the training process. The structure was good for me, I worked in a nice balance of solo runs and group runs, and I just thoroughly enjoyed a few of the long runs – especially the last 20 miler with JackRabbit and my solo 12 in Boston a week before the race. I was much more deliberate this summer about prioritizing running (and it helped that F was training for a half marathon most of the time, and understood what I was up to and why I was going to bed before 9) than I was when preparing for NYC. I didn’t work weekends, which took a lot of pressure off compared to last year. The two weeks we were in the Pacific Northwest, I built “off weeks” into the schedule so I wouldn’t be stressed about getting runs done in addition to all the gnarly hiking we were doing.

My goal for the race was a finishing time of 4:30:00, which translates to about 10:17 per mile. (There was a side goal of running a negative split and getting a free pair of shoes from Strava, but we’ll just let that go.) I really thought that pace, for 26.2 miles, was within reach, but in the end it wasn’t. At least not the day of the race. My final time was 4:54:13, which gives an average pace of 11:17 per mile. On the one hand, ugh. On the other hand, this was still a 38-minute improvement over my time at NYC last year. 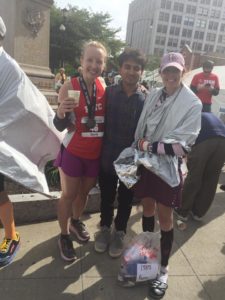 In terms of logistics, race weekend was a dream. T and I gave ourselves plenty of time to get to Scranton, hit the expo for our bibs and some accidental shopping, ate well, and slept early the night before the race. On race morning we were up, coffeed, fed, and on the bus to the start line right on schedule. We met up with two of my running club friends while we waited in the high school before the start, which was great. The weather was cold but dry – actually a little colder than I’d expected, but we were able to wait in the high school gym until about ten minutes before the start. I wore shorts, my club singlet, and my sleeves, and I felt chilly only for the first two miles. Shoes were my fresher pair of Hoka Clifton 2s.

After the (real!) cannon went off, I started running with the 4:30:00 pace group. They went out a little fast and I went out a little fast – closer to 10-minute miles for the first half of the race. I took my Clif Shots at around 1 hour 15 minutes, then 2 hours, then 2 hours 45 minutes. I had water at every other aid station, more or less, and a little Gatorade – the Gatorade was gross and probably a mistake. I should’ve skipped it and had another Clif Shot or two. Sticking around 10-minute miles, I cruised along happily until mile 14 or 15, and at that point I began to gradually slow down even though the effort level was staying the same. From then on, it was a gradual slowing until the finish, with a little bit of walking at the final hills. In the final miles I was working hard to talk myself into keeping the shuffle going. It was a lot of “this is SO HARD” over and over in my head, but also realizing “duh, of course it’s hard!” I managed the tiniest kick at the finish (cheering teammates were so helpful). I feel like I simply didn’t have the energy I thought I would have in the second half.

So what happened? I went out a little fast. Of course, I’m calling 20 seconds per minute “a little fast” and it could’ve been much more significant than I realize. During the first half, I thought I was running closer to 10:10s on average, but I still knew it was too fast, and I should’ve been smarter about it. Another thing: I came down with a head cold the Thursday before the race – my nose was running like a maniac but I didn’t feel bad – and that could’ve had more of an effect on my system than I realized. Other possibilities? I might have run those two last long runs – 18 miles two weeks before, and 12 miles a week before – too hard, and still been recovering from them. Or maybe I simply wasn’t trained and ready for the pace I thought I could handle. I won’t ever really know, but I’m pretty certain that going out too fast WHILE I was recovering from a cold was Not Smart.

On the bright side, nothing feels injured. I had sore quads for two days, but there were no blisters, pulled muscles, or other weird pains to deal with. Also, I’m proud that I was able to keep going (even if it was a shuffle) at the end – I think that shows a strength of will that I didn’t have a year ago. I am incredibly impressed with how well T did (qualified for Boston) and how well my teammates ran. I’m feeling so lucky to have supportive family members, friends, and teammates.

A few words about the Steamtown Marathon itself: It is amazing. It is a fast course, early fall, capped at 3,000 runners, and really, really well organized. The pre-race emails were both helpful and hilarious. The expo was great, the start- and finish-line experiences were superb. There was chocolate milk ready for me within 20 feet of the finish line. Five stars, highly recommended.

What’s next? A few weeks of running for fun. Entering the lottery for the Gorge Waterfalls 50k next spring. Climbing. Trails, dude, trails. Maybe a 26.2-mile run on my own in a month or two, just to see what I can do. 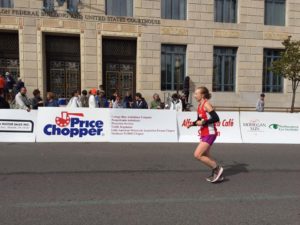 Tuesday 10/4/16: One mile warmup, one mile timed, one mile cooldown before work. Timed mile was 7:58, which is the fastest mile I’ve run!

Friday 10/7/16: Rest day, snuffling and blowing my nose but not feeling that bad.

Saturday 10/8/16: A little under 2 miles easy in the wee hours before packing up and getting on a train headed north.

Sunday 10/9/16: Steamtown Marathon! In terms of logistics and weather, it was a dream. In terms of my ability to run 26.2 miles at the intended pace, I was disappointed. More to come in a race report. Overall it was a great experience and I’m proud that I kept going even when it got really hard and painful. And my running friends and my non-running-but-incredibly-supportive family and my running-and-incredibly-supportive husband are all the best. *teary grin* 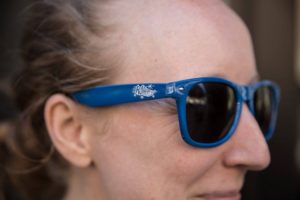 Monday 9/26/16: Glorious rest day. Not a lot of soreness from yesterday’s long run, but I was still feeling pretty wound up and excited about how well it went.

Sunday 10/2/16: Quick trip to Boston and I was so excited to do my final semi-long run along the Charles River. Okay, actually I was maybe a little over-excited. I was planning on long easy run pace (11:00-11:30/mile) but I did the 12 miles at a 9:40 average per mile. Grinning the entire way. Whoops? I probably should’ve kept the pace more under control but it just felt so fun to RUN. And I wasn’t struggling at the end (negative split, yeah!) plus I managed a full day of walking around the city after without much soreness.