This week was a strange limbo of “I should already be tapering but I didn’t get the long run last weekend so I’m still not tapering” weirdness, all resolved by a fantastic long run on Sunday.

Monday 9/19/16: Long-ish run down to Coney Island after work: 11.5 miles. I thought there was a possibility of making this into my last long run but it was too dark by the time I got there and the streets I would’ve had to run home were a little sketchy so I called it good at 11.5 and took the subway home with a bottle of chocolate milk.

Wednesday 9/21/16: 5 miles in the morning (still humid! What is this!) with a friend, and and additional 3 at night, running home from a first-aid training.

Thursday 9/22/16: Biked to the climbing gym for an hour of bouldering, then biked home.

Friday 9/23/16: Morning run with a friend, then after work I biked to and from the track with F to run his first-ever track workout. 9.4 miles running and 7 miles biking for the day.

Sunday 9/25/16: Nailed it! 20 miles at the JackRabbit “Burrow run” – perfect weather and I made some new friends along the way. Average pace 10:15 (I was aiming for 11’s but was happy that faster felt so manageable). A handful of stops for water, lights, etc. along the way but overall this was a great confidence booster. And now I taper.

The humidity lifted (briefly) and life felt amazing. Also, I’m a little late in posting this.

Monday 9/12/16: Rest day, but the weather was cool and clear and the air was dry so I went out for a little fun run in my racing shoes after work. 2 miles, some strides, some cartwheels.

Wednesday 9/14/16: Back to warm, humid weather. I still managed a good run after work – possibly the best-feeling run I’ve had in a few weeks. 10 miles with an average pace around 9:50. Lots of experimenting with slight stride adjustments to keep my left leg from tightening up (plus some quick stretches at every water stop). The combination seemed effective – the tightness would hit occasionally but then fade.

Thursday 9/15/16: Nearly two hours of climbing in the morning, plus almost 25 miles on my bike (to gym, to work, to Central Park, riding in the Transportation Alternatives rally for safe streets, and riding home).

Saturday 9/17/16: Camping with friends and realizing a long run is not going to happen this weekend :/

I’m only counting 6 days in this week, since last week’s long run happened on Monday. The humidity came back at the end of the week and I think I was way over-exhausted from the weekend trifecta of hard hike, trail run, long run … so there was not much going on this week. I hope next week is back on track. And I know a down week isn’t the end of things.

Wednesday 9/7/16: A combination of bouldering, foam rolling, and stretching at the gym in the morning (45 minutes), then a loop of the Prospect Park trails after work. 4.3 miles total.

Thursday 9/8/16: Early-morning loop of the park with a new running club friend – 4.5 miles total. I’m still feeling a little sore/cranky from the heavy hiking and running this past weekend and am trying to take it a little easier for a few days.

Saturday 9/10/16: So humid, so tired. Rest day (except for an hour volunteer dog-walking).

Tuesday 8/30/16: Trail night! A group of us did mostly trails and a little road running – my total distance was about 8 miles. My schedule called for 4 miles easy with some strides … oops.

Wednesday 8/31/16: 7 miles: first a park loop with F, then a brief meetup and run up the hill with friends, then the final miles alone.

Friday 9/2/16: 10-mile run after a nice short day at work: one park loop with friend C, then two loops on my own. I was trying to hit something approximating marathon pace (10:15 or 10:20) near the end but just bounced all over the place. The weather is cooler and slightly less humid, which feels so good.

Saturday 9/3/16: 9.5-mile hike about an hour by train up the Hudson (from Breakneck Ridge to Beacon).

Sunday 9/4/16: I joined one of Brooklyn Trail Runners’ runs and did 5.3 miles on the Prospect Park trails. Tried to keep the pace easy.

Monday 9/5/16: 20-miler! Overall a really good run. My left leg got crazy tight and crabby a few times, but I realized if I stopped and stretched it good it was back to normal. I think I need to start taking foam rolling and stretching a little more seriously. 11:20 minutes/mile average.

Totals (counting 8 days in this week since I waited until Monday for my long run): 50 miles running, 9.5 miles hikin. 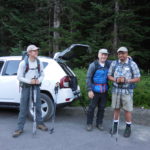 I want to write about Mount Saint Helens but I don’t know if I can do it justice.

The mountain is also known as Loowit or Lawetlat’la. The last major eruption was in May 1980, a year before I was born. The last minor eruption was in 2008. When I realized we wouldn’t be hiking the Wonderland Trail around Mount Rainier on our August trip to the Pacific Northwest, I started wondering if we could do a day hike to the rim of the Saint Helens crater instead.

We could, but boy was it tricky.

The best description of this hike I found was at OregonHikers.org: “If you are a hiker in good shape, this hike will tear you apart.” And the best logistics information was, of course, from the Mount St. Helens Institute’s website. Permits were already sold out (only 100 people can summit per day through the summer) by the time I was looking into it, but I finally found some second-hand on Purmit.com. 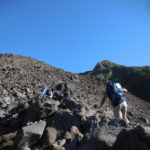 My dad, my husband, a friend, and I set out in the wee hours of the morning on August 18 for the drive to the trailhead. The weather was as perfect as possible, and we started the hike about an hour after sunrise. We carried tons of water, hiking poles, gloves, sunscreen, and gaiters, and were all in decent shape. The climb – 4.5 miles one way, with a 4500′ gain in elevation to a peak of 8365′ – shredded us all. The first 2 miles were on a nice forest path, but after that it was about 1.5 miles of boulder scrambling followed by a mile of ridiculously steep scree – this part was like walking up a steep sand dune. For a mile. On the nastiest sand ever.

It was incredibly hard, but the view from the top was equally incredible: the crater, with its domes, its mini-glaciers, and the occasional rockfall; and then around us Mount Rainier, Mound Adams, Mount Hood, and, way in the hazy distance, Mount Jefferson. 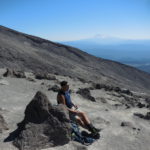 Resting, with a view of Mount Adams (?) near the transition between boulders and scree.

The trip down was almost as hard as the trip up. After so much time in the sun on the exposed slope we were hot, the wind was picking up, and toward the end we were running really low on water, despite having brought more than we thought necessary. Huckleberries along the forest trail near the bottom improved our spirits significantly, as did dumping the ash out of our shoes when we were done and driving into the little town of Cougar for a solid meal and some beers.

Would I do it again? Not any time soon. But eventually, yeah, I bet I could be talked into it. 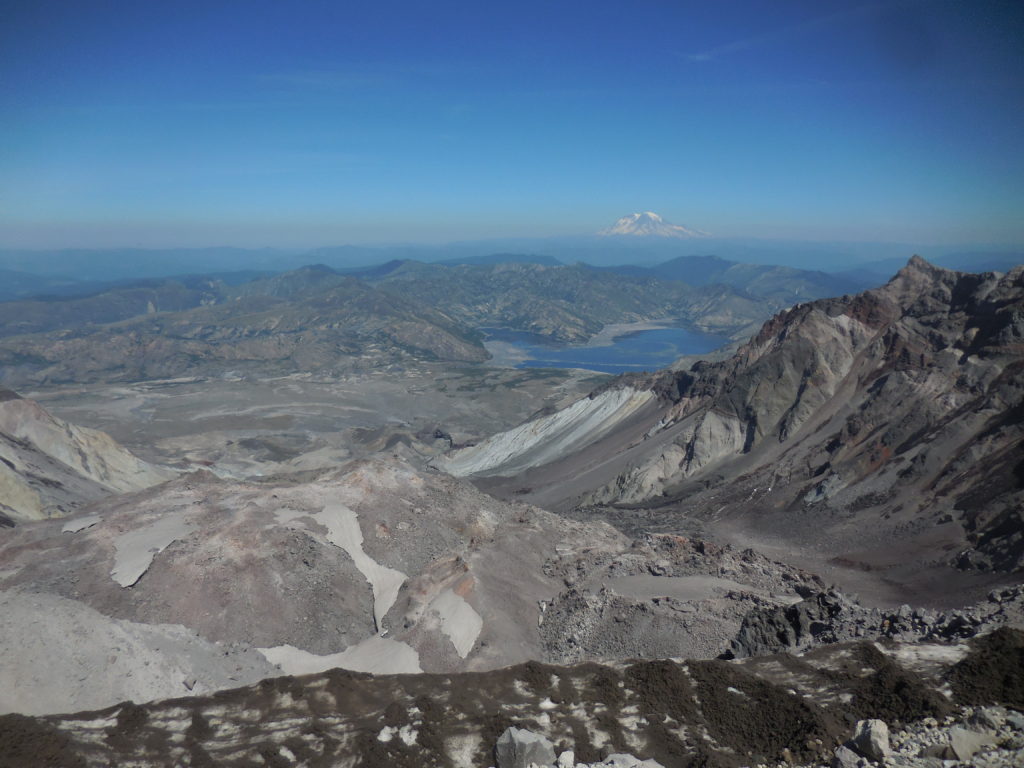 View into the crater, with Mount Rainier in the distance. Seeing this was the reason for the season … erm, for the hike. 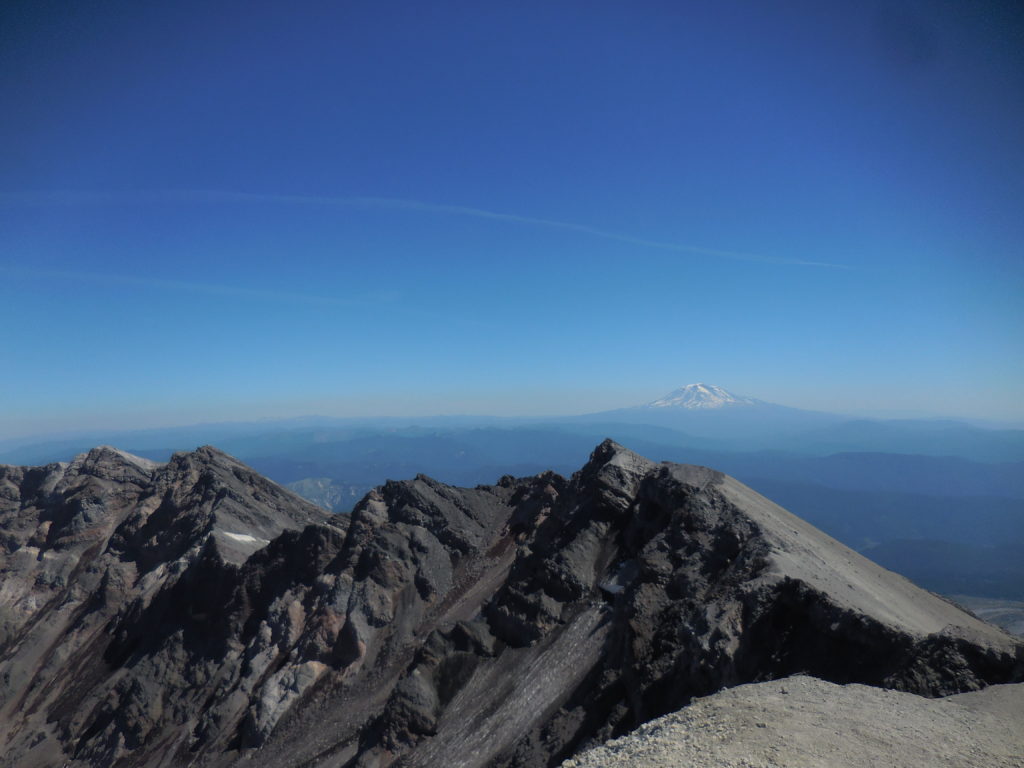 East side of the crater, with Mount Adams (?) in the distance. We heard some loud rockslides happening over that way. 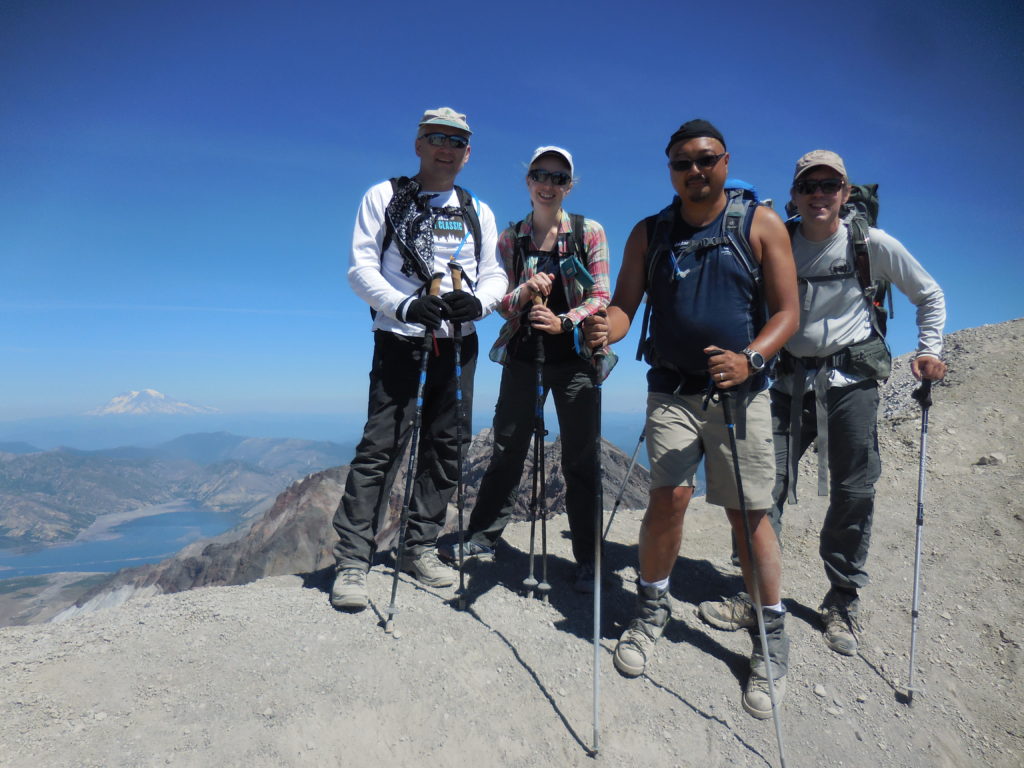 Happy but entirely exhausted hikers on the rim of the crater, not quite ready yet to think about the hike down.