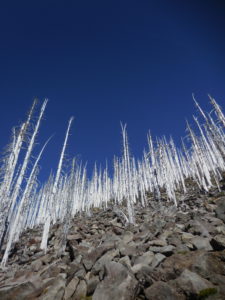 Second of two “vacation” weeks between the real weeks 10 and 11 of training for Steamtown.

Monday 8/22/16: Repeat of the 9.75-mile run from my sister’s to my parents’. This time the reward was coffee and sweet rolls. In the afternoon I went for a 3-mile hike with my sister in the Silver Falls area. 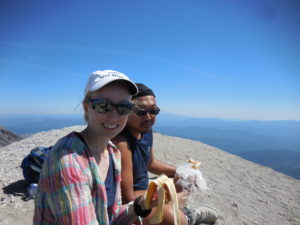 I set up my training plan with these two vacation weeks (following week 10 of 18) as down weeks, with the plan that we would hike the Wonderland Trail around Mount Rainier and I would not be running much, if at all. Plans changed and Wonderland didn’t happen, but I still left both weeks open for lots of hiking and basically running whenever I felt like it.

Monday 8/15/16: I did a 6.5-mile morning tempo-ish run from (another) sister’s house, then added 3 miles in the evening with F down by the Willamette River.

Tuesday 8/16/16: This was moving day for my parents, so it wasn’t exactly a rest day, but I didn’t run. Let’s call it cross-training.

Wednesday 8/17/16: 9.75-mile hilly morning run from my sister’s house to my parents’ place to have coffee with them. It was a gorgeous run through wooded areas and fields and I absolutely loved being able to run to visit my parents!

Saturday 8/20/16: Made sure my legs and feet were still working on a 3.7-mile loop near my parents’ house, with lots of stops to eat blackberries along the way.

Totals: 32 miles running, 12 miles hiking, 1 volcano climbed. I’m very happy with this mileage on a “do whatever I feel like” week.

I’m just back from two weeks of vacation, so this is getting posted a little late…

Tuesday 8/9/16: Instead of climbing I slept in and it felt so good. After work I met up with some running club friends for 4 miles of trails in the park. I wore my heart rate monitor because I want to start tracking that more. 4.9 miles, 10:41 avg pace, 155 avg hr.

Wednesday 8/10/16: It was terribly hot and humid and I wanted to to about 9 miles with a bunch of half-mile intervals … fail. I ran a grand total of 3.25 miles and my knee felt angry (if I remember right, it was the knee that convinced me to stop, not the humidity).

Friday 8/12/16: Last day of work before vacation; I’d hoped to be in the office a half day and run in the afternoon but I was in the office all freaking day. Guess it was another rest day.

Sunday 8/14/16: And … running in Oregon! 2 laps of the loop road my sister lives on for a total of 4 miles. Loving the country roads and lack of humidity. 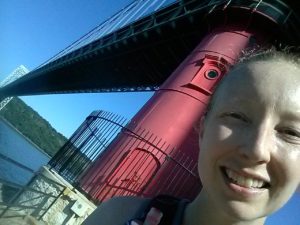 Halfway there. I hit 121 miles of running in July, which is my second 100+ month ever (first was 104 miles in April of this year, at the peak of training for the Redding Half). And 39 miles of running this week is, I think, my longest running week. Yay!

Monday 8/1/16: Biked to and from the climbing gym (for an hour of bouldering). I felt tired/sore from the weekend but managed to climb my first V4, on my first attempt! I’d watched some guys trying it yesterday, took another look today, and thought, “What the heck. I’ll try.”

Tuesday 8/2/16: Morning: bike ride to and from climbing. Evening: 7 miles on trails and grassy meadows in Prospect Park with two running club friends. I was exhausted at the end but it was such a fun run. The weather has been cooler and less humid and it feels so nice.

Wednesday 8/3/16: This was my final race of the summer 5K series! There’s one more in two weeks, but I’ll be out of town for it. I ran a 26:25 thanks to the less intense weather and some sensible pacing I was able to do for the first mile. Then beers, then a post-beer run home, for a total of around 5.5 miles.

Thursday 8/4/16: An hour of top-rope climbing with J in the morning, then 9 miles after work, still enjoying the lower temperatures and lack of humidity. The run was 1 mile warmup, 7 miles at marathon goal pace (which is 10:00/mile), 1 mile cooldown. It felt great at first but the second half was hard work – my legs were feeling tight and angry, and my stomach was incredibly upset. I’m pretty sure the stomach thing was because of something I ate, not because of the running.

Friday 8/5/16: Another hour of top-roping, but I was feeling pretty weak after whatever stomach thing hit last night.

Saturday 8/6/16: Rest day after an hour of easy bouldering in the morning – I opted to push my long run to Sunday to give myself a little more time to get over whatever hit me Thursday evening. Slept a lot.

Sunday 8/7/16: 17-mile morning run from Brooklyn up to the George Washington Bridge. I was aiming for 18 and things were feeling great until the extreme hill at mile 16, so I decided 17 was enough. Avg. 11:30/mile.