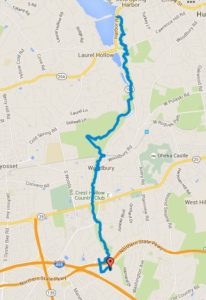 North to Cold Spring Harbor then back.

Goal: Finish happy. Yeah, it’s dorky, and this is the first time I’ve ever had this as my goal, but I think it was the right thing to aim for. This was my first trail race in excess of 6 miles and I only registered five days before the race.

Training: I trained well for (and PR’d at!) the Redding Road Race half marathon a week earlier. Running the Greenbelt 25K was a last-minute decision so my week of training was basically two days of rest, one super-easy run/walk, 4 easy miles on trails, and 4 miles of easy road running. The last run was the night before the race – not ideal but it was important to get a run-to-dinner in with my husband, and I was looking at this 25K more as a training/test/try-it-out than a race.

Overview: The website described this as a “challenging but fair” course and I felt like it was.

I met up with the Brooklyn Trail Runners crew at Penn Station for the early train to Hicksville, and the race provided a shuttle from Hicksville to the start/finish (the Greater Long Island Running Club clubhouse). Everything was really well organized, aid stations were well stocked, trail was marked as well as a trail can be, and both races (there was also a 50K) started on time.

My two main concerns going into this were navigation and staying strong over the combination of distance and hills. The course was an out-and-back, and during the “out” leg I stayed with a group of runners and had a chance to take a good look at the markers: white blazes along most of the trail, plus orange tape along straight stretches and green tape at turns. We got more spread out on the “back” leg but by that point I felt confident about where I was going – and actually helped someone else get un-lost! In terms of staying strong for the whole distance … well, I did my best, and I think with more training, especially on hills, I’ll get better. I was happy that I was able to keep a decent jog going for the last few miles after feeling seriously exhausted by the hills in the middle miles. I hiked most hills – definitely the sensible option, in my opinion.

The course actually measured a little under 25K (14.6 miles on my watch, rather than 15.5) but I wasn’t complaining. The first third was net downhill, the middle third was rough with lots of steep elevation change, and the final third was net uphill (it was an out-and-back). The weather was uncomfortably cool before the start and after the finish, but just right for running. The trail was mostly single-track but not overwhelmingly technical, apart from a few areas full of roots, which might be a result of recent rain and erosion.

I finished about 2/3 back in the pack, which didn’t really surprise me. I’d love to improve on that in the future.

Worked well: I set my watch to just give me 5-mile splits and otherwise didn’t look at it. This worked well because I didn’t want to worry about time, just have a general idea of how I was doing. I think I was smart about staying hydrated (water and Nuun), eating watermelon (yum!) at every aid station, and taking a Clif shot before I felt I needed it. Ultimate Direction’s Ultra Vesta hydration pack is a winner.

Learned for next time: Don’t pin my bib where my hydration pack’s going to bump it and make crinkly sounds! Duh. Don’t forget to use Body Glide to avoid sports-bra/ribcage chafing. Bring warmer clothes for before and after. And I think it’s almost time for new trail shoes.

Up next: More biking and climbing than running for the next week, then hopefully a good combination of speedwork and trail outings through early summer.